Can You Sue if You Wake Up During Surgery? 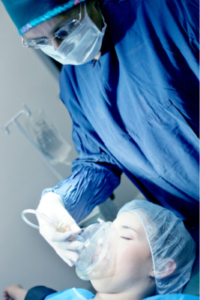 
Anesthesia is administered to keep patients comfortable and pain-free during surgeries and medical procedures. But what would happen if you were to wake up during surgery?

Although anesthesia is often effective when administered with care and precision, it can carry huge risks if not delivered correctly. According to the Mayo Clinic, it’s estimated that around 1-2 people in every 1,000 may wake up during surgery- even after being administered anesthesia. Oftentimes, people are unable to move or speak to let the doctors know that they’ve woken up, this is called unintended intraoperative awareness.

One of the critical roles during surgery is that of an anesthesiologist. These specialists exist to properly administer and monitor a patient during a procedure that involves anesthesia. A medical error by an anesthesiologist can lead to catastrophic consequences like severe pain, long-term psychological problems, and in some cases, even death. But, in Ohio, can you bring a medical malpractice lawsuit if you wake up during surgery? The answer is not a clear as one might think.

There are four main types of anesthesia. The type a patient receives during a medical procedure depends on different factors like the patient’s health, the type of procedure, and the patient’s preference.

Sedation is a common form of pain control and is usually administered for less invasive procedures. Typically given through an IV, sedation levels can range from minimal to deep depending on the procure being performed. Although some patients experience slow breathing and drowsiness, patients will not be unconscious as they would with general anesthesia.

Regional anesthesia is used to numb a large part of the body at one time. This type of anesthesia is usually used when it’s better for the patient to be awake and is administered through an injection or a catheter. A common type of regional anesthesia is called an epidural and is used in childbirth in order to manage the pain of women giving birth while allowing them to remain conscious and awake.

Local anesthesia is the least invasive form of anesthetic and is often simply a one-time injection to numb a small area of the patient’s body. This type of anesthetic allows the patient to be awake and conscious while a small procedure like a biopsy or stitching is being performed.

Waking up During Surgery – Anesthesia Awareness

If a patient wakes up during a surgery in which anesthesia was administered, it’s called “accidental awareness during general anesthesia” (AAGA). According to CBS News, one study found that 51% of patients who experienced AAGA experienced serious distress post-surgery while 41% experienced long-term psychological damages.

Sandra, a patient interviewed for the report, explained her experience with AAGA. “Suddenly, I knew something had gone wrong, I could hear voices around me, and I realized with horror that I had woken up in the middle of the operation, but couldn’t move a muscle… while they fiddled, I frantically tried to decide whether I was about to die”, she said. She continued to suffer nightmares for more than 15 years after her operation.

Other physical sensations such as stitching, pain, tugging, paralysis, and choking were reported by patients who experienced AAGA, with some even reporting long-term post-traumatic stress disorder (PTSD).

Can You Sue a Doctor or Hospital if You Wake Up During Surgery?

Anesthesiologists are trusted medical specialists who are guarded with protecting a patient’s vital life functions while under the effects of anesthesia. Unfortunately, anesthesiology malpractice can occur if a specialist is careless or does not follow proper protocol.

At Tittle & Perlmuter, the most difficult part of our job is explaining to folks that because our legislature decided to pass laws protecting doctors and hospitals, we will be unable to take your case – this is the case with AAGA. In other words, the only medical malpractice cases we are able to take are those where an individual dies, becomes paralyzed, loses a limb, or suffers a catastrophic, permanent injury. Generally, AAGA does not fit the bill.

So, while AAGA may, indeed, occur from negligence, Ohio’s law essentially prevents law firms from accepting these cases as the cost of the case would outweigh any potential recovery.

If an anesthesia error occurred during your surgery or the surgery of a loved one, it can lead to long-term psychological and physical effects. Contact a trustworthy medical malpractice attorney to learn about your options.

Tittle & Perlmuter has fought hundreds of medical malpractice cases including those involving physician negligence, surgical errors, and anesthesia malpractice. We want to help you get the justice you deserve. Call one of our attorneys or fill out a contact form for a free, no-obligation consultation.